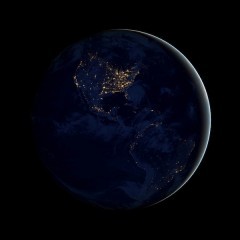 I was asked after the Leicester Uni showing if there’s a follow-up.  Hmm… how about Anthropolis? Will most of us soon be living in a single virtually networked urban space? Not a collection of world cities but a single World City? We already migrated to cities without politicians or leaders recognizing what we were up to…..

It’s a cliche to say looked at from the Earth by day one side is the Blue Planet.  But looked at by night the other half is The Electrified Planet.… Anthropolis?  If it was an SF story would it be… utopian, dystopian, or something more surreal? Or maybe even sinister?